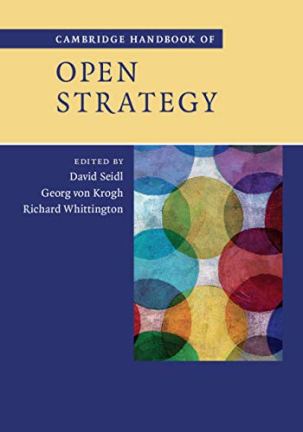 In any case, I would have been happy to contribute to the brand new “Cambridge Handbook of Open Strategy”, co-edited by David Seidl, (Universität Zürich), Richard Whittington (University of Oxford) and Georg von Krogh (ETH Zürich). Given that the chapter’s co-author is my sister Laura (Radboud University Nijmegen), I am even more proud about our contribution on “The Relation between Openness and Closure in Open Strategy: Programmatic and Constitutive Approaches to Openness”.  A short excerpt from the Introduction:

Two facets are all but universally present in current works on Open Strategy. First, while being aware of and addressing challenges and dilemmas associated with openness in strategy making (Hautz et al., 2017), increasing openness is mostly perceived as normatively good, as an ideal that should be achieved. […] Second, openness is mostly considered to be the opposite of closure, or at least the other endpoint of a continuum from closedness to various degrees of openness in terms of greater transparency or inclusion (Whittington et al., 2011).

Taken together, an affirmative perspective on openness as opposed to closure is central to a currently dominant programmatic approach, which is mainly concerned with putting openness into practice and unleashing its respective potential. However, as we will argue in this chapter, addressing many of the tensions or dilemmas observed in empirical endeavours to implement greater ‘openness’ could potentially benefit from another perspective, which understands openness (and closure) as a paradox (Putnam et al., 2016) where openness and closure appear contradictory but yet simultaneously depend on each other. Key for such a constitutive approach towards openness is that this paradox cannot be dissolved entirely but only addressed in a specific way, namely by legitimate forms of closure.

A pre-print version of the article is open access available at the Open Strategy Network, which features pre-prints of all chapters in the Handbook.